All right, it’s been a few days since my last news update and there are a variety of reasons for that which I’ll get into in tomorrow’s post. In the meantime, let’s get caught up...

First, we’ve got some new reviews for you all to enjoy. Tim has posted no less than four Blu-ray reviews since last week, including his thoughts on Terence Fisher’s 1961 Hammer Films classic The Curse of the Werewolf from Scream Factory, Fritz Bottger’s Horrors of Spider Island (1960) from Severin Films, James Signorelli’s Elvira: Mistress of the Dark (1988) from Arrow Video, finally Sean Cunningham’s Friday the 13th (1980) in a new 40th Anniversary Steelbook Edition from Paramount. Enjoy!

Now then, there’s not a lot of major announcement news to report at the moment, but we do have some interesting odds and ends...

Let’s start on the 4K front: Arrow Video has announced the release of Giuseppe Tornatore’s beloved Cinema Paradiso (1988) on both 4K Ultra HD and regular Blu-ray on 9/28. [Read on here...]

All right, we’re working on FOUR more 4K Ultra HD reviews for the next couple of days, at least of the first of which we hope to have posted later this afternoon.

In the meantime, we’ve just launched our second giveaway on The Digital Bits’ Facebook page, offering readers the chance to win one of Paramount’s three new Tom Cruise 4K Ultra HD titles – Top Gun, Days of Thunder, or War of the Worlds. All you have to do to enter is follow The Bits’ Facebook page and reply to this post (linked here) with your answer to the question you’ll find. Entries will be accepted until 11 AM Pacific tomorrow (Thursday, May 21). The contest is open to US residents only (due to COVID shipping restrictions—sorry!). THREE winners will be selected at random from the list of those who enter and will be announced tomorrow afternoon. Good luck!

Meanwhile today, we have a bit more announcement news... [Read on here...]

All right, let’s get right down to it. I’ve been reluctant to talk about the prospects of James Cameron’s The Abyss and True Lies arriving on Blu-ray (and dare we hope 4K) in 2019 because we’ve had SO many solid reports that these films were finally coming only to see them evaporate. And when I’ve tried to find out why, Fox always pointed at Cameron and Cameron always pointed back at Fox. What I finally figured out is that Cameron has just been too distracted with other projects to approve new transfers of these films, first with diving to the bottom of the ocean and more recently with his Avatar prequels.

As longtime Bits readers will be well aware, both films were expected for their last major anniversaries in 2014. We know for a fact that 20th Century Fox Home Entertainment had even prepared new Blu-ray releases (most recently rumored for release in 2017), but Cameron never got around to approving the new transfers, so the Blu-ray releases never happened. The transfers were quietly released to the pay cable movie channels only.

Well, now it’s five years later. 2019 officially marks the 30th anniversary of The Abyss and the 25th of True Lies. Naturally, that means Bits readers have been asking me for weeks about the prospects of finally seeing these films released on Blu-ray (and, again, dare we hope 4K). I’ve even spoken to studio sources about this recently. And again, what I learned was that the ball was still in James Cameron’s court. [Read on here...]

We’ve got just a quick update for you today, but we’ve got a bit of release news and some new reviews too.

First up those reviews... Tim has checked out National Lampoon’s Class Reunion on Blu-ray from Kino Lorber Studio Classics, and David has posted his thoughts on Black Widow (1954) from Twilight and The [Rec] Collection from Scream Factory.

Now then, we’ve confirmed with Sony that there are currently no plans to release The Girl in the Spider’s Web on physical 4K Ultra HD in the States. This could change if the title performs unexpectedly well on Blu-ray, but the film’s failure at the box office seems to have put the kabosh on the studio’s initial release plans. It may also have cramped plans to release David Fincher’s The Girl with the Dragon Tattoo on 4K and Panic Room on Blu-ray/4K. But we’ll have to wait and see. [Read on here...]

All right, this morning’s post is a quick one, but we do have some interesting announcements and street date confirmations for you today… 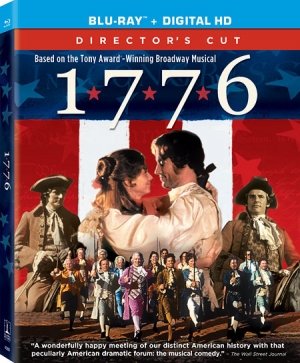 The big release news today is that Sony Picture Home Entertainment has just set Peter H. Hunt’s classic musical 1776 for release on Blu-ray on 6/2. The film will be the 166-minute Directors’ Cut, recently restored in 4K by Grover Crisp and his team at Sony Pictures Colorworks from the original camera negative and with Hunt’s guidance. According to Hunt: “I’m ecstatic. 1776 is back to where it should be. The work done by Grover and his team is miraculous. It looks better than when it premiered. It’s gorgeous!” In addition to the film, you’ll get all-new audio commentary with Hunt, William Daniels and Ken Howard, a second commentary with Hunt and Peter Stone, deleted and alternate scenes with commentary, 4 never-before-seen screen tests, archival screen tests, and the film’s original teaser and theatrical trailers.  [Read on here…]

First up this morning, our own Dr. Jahnke checks in with today’s Hell Plaza Oktoberfest Blu-ray review in the form of StageFright from our friends at Blue Underground. Do give it a look.

Okay… we’ve got a good bit of ground to cover for you guys today as the dust begins to settle from another Comic-Con, so let’s get right to it.

First let’s talk about the titles that were officially announced at (or around) the show, and then we’ll get to the latest rumors and other news on those that weren’t. We’ll start with Batman… [Read on here…]

New Breaking Bad: Complete Series on BD & DVD, plus I, Frankenstein and more

We’ve got a new Blu-ray Disc review for you today. Dr. Jahnke has given Twilight Time’s new Bring Me the Head of Alfredo Garcia Blu-ray a spin – a Sam Peckinpah classic. The film is great and it sounds as though Twilight’s done a very nice job on the disc’s A/V quality and extras too. Don’t miss it.

Just to let you know, I’ll be back early tomorrow morning with my review of Peter Jackson’s The Hobbit: The Desolation of Smaug on Blu-ray – the theatrical edition that arrives in stores tomorrow.

Also here at The Bits today, our own Russell Hammond has updated the Release Dates & Artwork section with all the latest Blu-ray and DVD cover art and Amazon.com pre-order links. As always, anything you order from them in the same session after clicking through our links helps support our work here at The Bits and we surely do appreciate it. [Read on here…]

RT @BillHuntBits: My goodness! Akira Kurosawa’s magnificent DERSU UZALA (1975) looks better than I’ve ever seen it on #Bluray from @Imprint…

Bits #4K Review – @BillHuntBits checks out THE WAR OF THE WORLDS (1953) and WHEN WORLDS COLLIDE (1951) on #UltraHD and #Bluray respectively from @ParamountMovies #GeorgePal thedigitalbits.com/item/war-of-th…