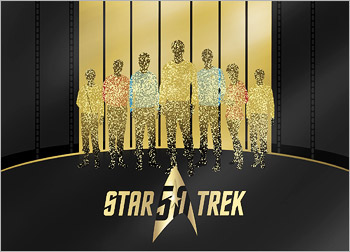 It’s hard to believe it’s really been 50 years since the debut of Star Trek on NBC. Of all the great Hollywood entertainment franchises, only Star Trek has continued to show its audience a positive vision of the future, inspiring generations of astronauts, scientists, leaders, and artists to try and make that vision a reality. Star Trek has also been a cornerstone film franchise for Paramount Pictures. When Star Wars took the world by storm in 1977, it’s Star Trek to which the studio turned in 1979. So it’s only fitting that Paramount, and partner CBS (which now owns the TV rights to the franchise), should celebrate its 50th anniversary with a new Blu-ray box set.

The 30-disc Star Trek: 50th Anniversary TV and Movie Collection is that celebration, focusing on the TV series and films based on the original crew of the Starship Enterprise that first launched the franchise back in 1966. On its surface, it’s a very nice box set; elegantly packaged and containing a good lot of content for a low price. Unfortunately, it’s also a bit disappointing; you probably own most of this content already, and some of it is in dire need of proper restoration and remastering that it didn’t get for this release. But we’ll come back to that.

Let’s take a look at the set’s contents…

The package contains two big multi-disc Blu-ray cases, the first of which holds The Original Motion Picture Collection and Star Trek: The Journey to the Silver Screen.

The former is a 6-disc set that includes Star Trek: The Motion Picture, Star Trek II: The Wrath of Khan, Star Trek III: The Search for Spock, Star Trek IV: The Voyage Home, Star Trek V: The Final Frontier, and Star Trek VI: The Undiscovered Country. With one exception, these are the same Blu-ray Discs that were included in the 2009 Star Trek: Original Motion Picture Collection box set (see our review here) – they are literally the same discs, just with new labels printed on them – and if you’re any kind of Trek fan at all you probably already own them. The exception is Star Trek II: The Wrath of Khan, which is the new Director’s Cut Blu-ray release from earlier this year (we’ve reviewed it here). And yes, it is the corrected version. The good news in all this is that you get the newly-remastered version of Trek II, which is absolutely stunning, plus all of that disc’s extras. You also get all of the previous extras on the other film discs. The bad news, of course, is that the A/V quality on all those other films is… well, poor by comparison. Unfortunately, the other films have not been remastered, but certainly should be and badly need it, as the presentations are rife with excessive DNR (Digital Noise Reduction) that makes everyone in each film look like wax figures. Many of you will know already of the extensive effort that we’ve made here at The Digital Bits (over the past two years) to convince Paramount to remaster these films for this set, but such was not to be. So the question remains: If the studio wasn’t willing to properly remaster all of these films for the 50th Anniversary of Star Trek, when will they?

Star Trek: The Journey to the Silver Screen is a single bonus disc comprising 5 all-new documentaries produced and directed for this set by Roger Lay, Jr. (whose excellent previous bonus features can be currently found on CBS’ recent Star Trek: The Next Generation and Star Trek: Enterprise Blu-rays, nearly all of which we’ve reviewed here at The Bits previously). The new material includes The New Frontier: Resurrecting Star Trek (HD – 30:01), Maiden Voyage: Making Star Trek: The Motion Picture (HD – 29:13), The Genesis Effect: Engineering The Wrath of Khan (HD – 28:18), The Dream Is Alive: The Continuing Mission (HD – 29:54), and End of an Era: Charting The Undiscovered Country (HD – 28:30). As you can probably guess by the titles, TMP, Trek II, and Trek VI are covered extensively in these documentaries, and the first of the lot looks at early efforts to return Star Trek to TV prior to 1977. The remaining documentary covers Trek III, IV, and V as a group. Archival photographs, footage, and interviews are used here, along with new interviews with many of those who worked on the series or films, including Nicholas Meyer, Manny Coto, David Gerrold, Judith and Garfield Reeves-Stevens, Dorothy Fontana, John and Bjo Trimble, Doug Drexler, Susan Sackett, Paramount executive Tom Parry, Adam Nimoy, TMP writer Harold Livingston, and many others. Also interviewed are a number of Treksperts, like Mark Altman (an occasional Bits contributor), Ed Gross, Marc Cushman, and Larry Nemecek, whose comments form the backbone of the documentaries. Even a few famous fans are included, among them Bill Prady (co-creator of The Big Bang Theory). Fifty years into this franchise, it’s difficult to find new behind-the-scenes stories or anecdotes worth telling that fans don’t already know, but Lay, Jr. manages to do just that here and it’s fun to see. Our only nitpicks about these pieces would be that they’re a little bit talking-heady and it’s a shame that Trek III, IV, and V don’t each have their own featurettes. Nevertheless, these new documentaries are welcome additions to this set and a lovely way to spend a couple of hours.

Moving on… the second of the two multi-disc Blu-ray cases included in this set is much thicker and holds 23 Blu-rays in all. The first 18 contain the complete Star Trek: The Original Series on Blu-ray Disc – the exact same discs as released previously (in 2009 – we’ve reviewed them here, here, and here) just with new disc labels, featuring both the original broadcast versions of the episodes as well as newly-remastered versions with enhanced visual effects, plus extras.

But here’s the best part: The final 3 Blu-rays in this set are all-new, and include the complete Star Trek: The Animated Series (all 22 episodes) which has never been available before on disc in HD!

Disc One includes the episodes Beyond the Farthest Star, Yesteryear, One of Our Planets Is Missing, The Lorelei Signal, More Tribbles, More Troubles, The Survivor, and The Infinite Vulcan.

Disc Two includes The Magicks of Megas-Tu, Once Upon a Planet, Mudd’s Passion, The Terratin Incident, The Time Trap, The Ambergris Element, The Slaver Weapon, and The Eye of the Beholder.

And Disc Three includes The Jihad, The Pirates of Orion, BEM, The Practical Joker, Albatross, How Sharper Than a Serpent’s Tooth, and The Counter-Clock Incident.

Unfortunately, there are no newly-created bonus features for The Animated Series, but all of the extras from the 2006 DVD release have carried over here and include text commentaries by Michael and Denise Okuda on Yesteryear, The Eye of the Beholder, and The Counter-Clock Incident, audio commentary by David Gerrold on More Tribbles, More Troubles and BEM, audio commentary by David Wise on How Sharper Than a Serpent’s Tooth, a storyboard gallery for The Infinite Vulcan, the Drawn to the Final Frontier – The Making of Star Trek: The Animated Series featurette (SD – 24:31), 11 short What’s the Star Trek Connection? clips (SD – including Introduction, Sehlat, Tribbles, Mind Meld, Holographs, Kor, Orion, Eugenics, Rapidly Aging Crew, James T. Kirk, and Native American Crew – 7:12 in all), and a few pages of Show History text.

Though it’s often overlooked, and its quality is much debated among Trek fans (especially given that Star Trek creator Gene Roddenberry asked for the series to be “decanonized” before his death), it’s hard for older fans not to look upon The Animated Series fondly. It’s essentially a kind of lost fourth season of The Original Series, featuring scripts that were adapted from some intended for TOS itself and the voices of most of that series’ original cast.

As presented on Blu-ray, these episodes look flat-out terrific. The series was produced on film in the 1970s, and those original elements have been scanned in full 1080p HD for this release (with the original 1.33:1 broadcast TV aspect ratio retained). Details are crisper than in the DVD presentations, with deeper contrast, and more vibrant and accurate colors. Fine detail is especially pleasing here. When you can spot little motes of dust on the glass of the animation stand, you know you’re looking at fine quality for vintage animation. The episode soundtracks are presented in new English 5.1 DTS-HD Master Audio mixes that offer excellent clarity and fidelity. The soundstages are front-and-center, as you might expect, but there is occasional and atmospheric use of the surround channels. There’s just something lovely and handmade about this series, and Blu-ray certainly reveals it at its best.

In terms of non-disc material in this Star Trek: 50th Anniversary set, the packaging here is quite nice (you can see it below). It’s a hard-shell slipcase wrapped with a transparent plastic cover that’s removed vertically and features a sparkling transporter effect that overlays the crew figures on the slipcase underneath. The box that holds the actual disc cases slides out of the slipcase on the right-hand side. Inside it, you’ll find the two multi-disc Blu-ray cases mentioned above, as well as an envelope containing newly-produced Juan Ortiz mini posters for each of the films included in the box. The package also includes an exclusive version of QMx’s Starfleet insignia pin, with a magnetic clasp, featuring the franchise’s official 50th Anniversary logo in black on gold (the regular one available from QMx is reversed: gold on black).

As mentioned above, for all its shortcomings, the Star Trek: 50th Anniversary TV and Movie Collection is a solid box set and – at its current price of $129.99 on Amazon – a generally good value, especially for those rare fans who haven’t yet purchased any of these films or series on Blu-ray Disc yet. On the other hand, if you are a serious Trek fan you almost certainly own everything included here except for the Star Trek: The Journey to the Silver Screen bonus disc and The Animated Series. Our sources tell us that Paramount will release the latter on Blu-ray separately in time for the holidays (we’ll review it in more detail then). Of course, unless you’re rich, the bonus disc and swag are not worth the set’s price by themselves. But as The Genesis Effect: Engineering The Wrath of Khan featurette is also found on the stand alone Star Trek II: The Wrath of Khan – Director’s Cut Blu-ray, one can still hope – perhaps against hope – that the other new featurettes might appear on future remastered Blu-rays of the other films in this series… eventually. In the meantime, if this isn’t quite the Star Trek: 50th Anniversary box set that fans wanted, it’s still not half bad.

Star Trek: Journey to the Silver Screen (Extras): B 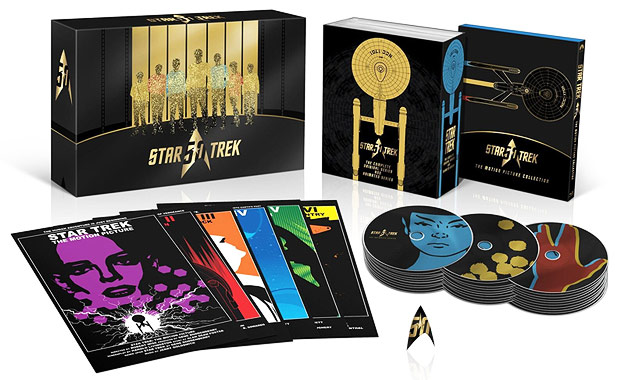