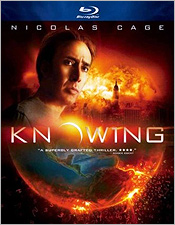 Nicolas Cage has made some questionable, even awful, choices of films to star in of recent years, but Knowing isn’t one of them. It’s an intelligent, well-constructed science fiction thriller that keeps you on the edge of your seat throughout, not on the basis of engaging special effect sequences, although there are those, but due to a thought-provoking premise whose explanation and resolution is doled out masterfully by director Alex Proyas (Dark City, I Robot).

The film begins with an intriguing sequence at a public school in 1959 where all the children are asked to contribute a picture showing their idea of what the future will look like for a time capsule to be opened in 50 years. One little girl, Lucinda (Lara Robinson), instead writes down a collection of numbers which are duly included in the capsule, but she then disappears only to be discovered in a storage closet at the school where she has scratched more numbers onto the back of the closet door. Jump forward 50 years and we are introduced to John Koestler (Nicolas Cage), an M.I.T. astrophysicist and single father whose young son is a student at the same public school at the time of the time capsule’s opening. Each of the latter-day students receive one of the capsule contributions from the 1959 class and Koestler’s son, Caleb (Chandler Canterbury), gets the number sequence. When Koestler examines it, he discovers that rather than being random, the numbers have a predictive capability that may give him a terrifying knowledge of Earth’s future. Struggling to come to grips with this knowledge and also becoming aware that his own son is somehow directly involved, Koestler allies himself with the adult daughter (Rose Byrne) and grand-daughter (Robinson again) of the now-deceased writer of the original sheet of numbers.

Apocalyptic themes are given a bad name by films like Independence Day, The Day After Tomorrow, and Armageddon (guilty pleasures though some of them may be), but don’t allow that to let you pass Knowing by. Its approach is that of any superior science fiction story – that of altering one or more variables in the world we know and asking what-if, all told in the context of the lives of ordinary human beings. Rooted in the question of whether the universe is pre-ordained or subject to random events, the story is doled out at first slowly by director Proyas, but with an increasing momentum that holds one’s interest throughout the two-hour running time. In a science fiction context, the ending is very appropriate, offering hope but not without a sense of loss and a degree of ambiguity.

While Nicolas Cage has made a good choice of film for a change, his attachment to Knowing is not all positive. His portrayal of Koestler is mostly realistic, but his wide-eyed reactions are at times overdone, and one in which he sinks to his knees with arms spread wide apart in awe is particularly grating. It must be said that some of the dialogue he’s provided is not particularly helpful, however (How many times must we be subjected to the trite “O my god” as a reaction to something striking?). Fortunately, the support he gets from Rose Bryne, Chandler Canterbury, and Lara Robinson is an effective counter-balance.

The 2.35:1 image is superb. It is sharp, strikingly detailed, and resplendent in its colour accuracy. Both interiors and exteriors are equally impressive. Much of the excellence can be attributed to the film being originally shot with the Red One digital camera which results in a grain-free image yet one that gives a nice cinematic feel. Black levels are deep and there is no evidence of any digital manipulation in creating the transfer. A reference quality image.

The DTS-HD lossless audio is similarly impressive, both in dealing with subdued atmospheric effects as well as more full-blown special effects bombastics. The surround delivery is about as good as you can get in its evocation of a 360° experience. Worth remarking on is Marco Beltrami’s score which is at times entrancingly mysterious and at others drivingly intense. It’s delivered with impressive fidelity at all times. A reference quality audio experience.

For bonus features the disc provides a very informative audio commentary from Alex Proyas, a standard making-of featurette, and a featurette on visions of the apocalypse that’s quite interesting and relevant.

It’s always a delight to find an intelligent thriller like Knowing. This one has a science fiction context that adds considerable interest and thoughtfulness. It’s also good to know that Nicolas Cage’s judgment of material hasn’t been irreparably damaged. Highly recommended.

RT @BillHuntBits: This is just a trailer, but if INDIANA JONES looks this good in #UltraHD from @ParamountMovies, I'd say we've got somethi…