It's a Gift (Blu-ray Review) 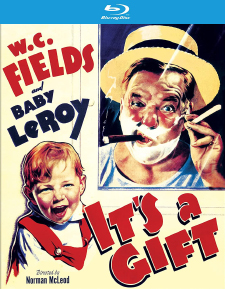 It’s a Gift is just that: a comic gift to the world, courtesy of W.C. Fields, director Norman Z. McLeod, and a raft of screenwriters, both credited and uncredited. The shooting script was by Jack Cunningham, based on a story by Fields (under his pseudonym Charles Bogle) and the play The Comic Supplement by J.P. McEvoy. But there were other contributors as well, and many of the jokes were developed on set. The story involves Harold Bissonette (Fields), a henpecked family man and grocery store owner who dreams of moving to California and buying an orange ranch, and then—actually, none of that matters. The story is nothing more than a razor thin framework on which to hang a series of hilarious verbal and visual gags. There’s no need for anything else, because the film’s primary conceit is to take a basic concept for a scene, and then methodically explore as many variations on that theme as it possibly can.

That’s the principle behind the early sequence in Bissonnette’s store, where he’s attempting to take an order from one customer, while being constantly interrupted by one thing after another: a destructive blind man (Charles Sellon), a no less destructive child (Baby LeRoy), the child’s mother (Diana Lewis), his wife (Kathleen Howard), and even his own hapless employee (Tammany Young). But the idea reaches its pinnacle in the justifiably famous porch scene, where Bissonette is trying to sleep on a bench, only to be interrupted, over and over again. The sequence employs a Tex Avery kind of logic, rising to the challenge of exploring just how many variations might exist for the same simple gag—the answer is, more than you might think. Yet for all of the celebrated moments in that section (“Carl LaFong!”), the funniest part may be the simple punctuation mark that Fields adds to the very end, just before it fades out. The slapstick is broad all throughout the film, but there are nicely subtle touches like that as well.

If there’s any problem with It’s a Gift, it’s that it might push a few of those gags one step too far, though that’s obviously a matter of taste. There’s also room for debate regarding how well the character of Bissonette works for the Great Man’s persona. Bissonette remains a passive victim of circumstance throughout the entire film, always reactive. There’s an argument to be made that Fields was funnier when he played active schemers who were willing participants in their own destruction. It’s a Gift might work just a bit too hard to keep him overtly sympathetic, when his charisma did that just fine on its own. But those are minor (and disputable) nitpicks for a film which remains a comic gem nearly a century after it was originally produced.

Cinematographer Henry Sharp shot It’s a Gift on 35 mm film using spherical lenses, framed at 1.37:1 for its theatrical release. Kino Lorber describes the master as “from a 2017 4K Scan,” but they give no information regarding the elements that were used. The original nitrate negative is doubtlessly long gone, meaning this likely came from some kind of dupe element—one which was not in the best shape. The language in the description is telling, because while it may be a recent scan, it hasn’t been cleaned up significantly—there are persistent scratches and other damage marks throughout the film. (There’s also at least one dropped frame, which appears at 31:47, just before Fields starts to lie down out on the bench.) Fine detail is adequate at best, but grayscale is good, and contrast and black levels are both solid. Short of an actual frame-by-fame restoration, it’s probably for the best that the damage was left alone instead of scrubbing everything clean with automated tools. It’s far from perfect, but at least it still looks like film, and it’s a definite improvement over DVD.

Audio is offered in English 2.0 Mono DTS-HD Master Audio, with optional English subtitles. It’s a Gift was a relatively early talkie, so expectations need to be tempered accordingly. It’s a reasonably clean track, with some noise but no major damage. There’s actually a bit more background noise than in later Fields films, but that’s not atypical for early talkies, and the dialogue is still clear enough.

The following extras are included:

Film historian James L. Neibaur is the author of The W.C. Fields Films, an analysis of all of the films that Fields ever made (including ones that have been lost), so he certainly knows his subject matter. He provides historical context including other films released in 1934, biographical details about the actors, and various stories about the production. He notes which lines and gags were ad-libbed on the set, and also points out where some scenes were removed. That’s actually pretty helpful, because it explains some apparent non sequiturs such as Bissonette’s reaction to the little girl asking him to play hopscotch. Some of the production stories are also interesting, such as the fact that the porch scene was originally scheduled for 27 shooting days, but was cut short because the film was already behind schedule. Neibaur definitely disagrees with my take about the nature of the Fields persona, as he spends time calling out what he feels is the importance of keeping Bissonette sympathetic. He does occasionally fall into the trap of describing what’s happening on screen, but there’s still plenty of good information in this commentary track.

In 2010, It’s a Gift was selected for the National Film Registry by the Library of Congress, and it’s easy to see why. The film is worthy of that kind of recognition, and it belongs in the library of any serious film fan as well.

RT @BillHuntBits: More good #4K #UltraHD news: @indicatorseries has just announced their first releases on the format due on April 24 in th…