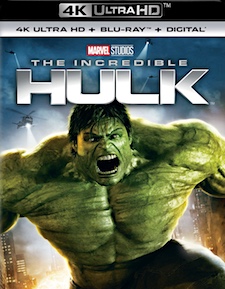 Bruce Banner (Edward Norton) is a scientist with a problem. He’s spent years on the run, hiding from General Thaddeus Ross (William Hurt) and the U.S. Government, after an accident that occurred while he was working on their super-soldier program exposed him to gamma radiation and left him fighting a constant battle with a monstrous version of himself that appears when he becomes too angry. When the military discovers Banner living in the slums of Rio de Janeiro, he manages to escape and returns to America to find his old scientist girlfriend (also Ross’ daughter, played by Liv Tyler) to get the research data he needs to cure himself once and for all. But Ross has employed a British merc named Blonsky (Tim Roth) to capture him and, after surviving their first battle in Brazil, Blonsky becomes obsessed with hunting Banner… and the monster he becomes.

As only the second official film in the franchise, Louis Leterrier’s The Incredible Hulk is an often overlooked entry in the Marvel Cinematic Universe. But if it’s been a while since you’ve seen it, go back and give it a second look, as it’s a damn solid film. Written by Zak Penn, the story takes its time drawing you in and building its characters, even after cleverly dispatching with the usual superhero origin story in the film’s opening credit sequence. Norton is terrific as Banner and, though he was later replaced in the MCU by the affable Mark Ruffalo, this more active and driven version of the Banner/Hulk character is very much missed in the franchise. The supporting cast is mostly effective, especially Hurt, who would eventually reprise the Ross character in Captain America: Civil War. The film’s climactic battle, which pits Hulk vs. the Abomination, is a bit too paint-by-numbers, but everything leading up to it is so good that it almost doesn’t matter.

The Incredible Hulk was shot on 35 mm film using Panavision and Arriflex cameras with anamorphic lenses. It was finished as a 2K digital intermediate, has been upsampled, graded for high dynamic range (in HDR10) and is presented on Ultra HD in the proper 2.39:1 theatrical aspect ratio. Despite the fact that this is a 2K upsample, the original photochemical elements offer tremendous detail and texturing, both of which are noticeably improved here over the previous Blu-ray release. What really makes the difference here though is the high dynamic range. This film has always had a high-contrast look, and those contrasts are all the more striking now, with incredibly deep and detailed shadows and gleaming-bright highlights. A steady wash of moderate grain remains at all times, giving the image a nicely cinematic appearance. But the color palette benefits the most from HDR, with striking and boldly-saturated hues, and wonderfully nuanced shadings in between. This image can’t rightly be called reference quality, but it’s pleasing nonetheless.

Fortunately, the 4K disc includes an object-based DTS:X lossless audio presentation that is absolutely reference quality. This is a big, lush-sounding, and incredibly robust and muscular surround mix; it’s one of the best yet on this format. Clarity is striking but it’s the sheer immersion that really impresses here. Whereas many surround mixes give the impression of creating a sort of dome of sound, there’s a smooth thickness to this mix that feels tangible, offering an additional measure of realism to the experience. Yet you’re never overwhelmed by the mix. Bass is both energetic and effortless, the panning is precise, and the score (an under-appreciated effort by Craig Armstrong, of Romeo+Juliet and Moulin Rouge! fame) is engaging. This is magnificent cinema surround sound; one only wishes that Disney’s 4K Ultra HDs of the more recent MCU films (think Thor: Ragnarok and Black Panther) had mixes this good. Additional audio options on the 4K disc include French, Spanish, and Portuguese 5.1 DTS, with optional subtitles in English SDH, French, Spanish, and Portuguese.

The 4K UHD disc itself includes only one special feature:

This is the same commentary that was featured on the previous Blu-ray edition. Of course, you also get that Blu-ray here, which includes the film in 1080p HD, along with the commentary and the following additional extras:

It’s actually a decent batch of features, with a little more substance and lacking the glossiness of the extras on more recent Disney MCU titles. Naturally, you also get a Movies Anywhere Digital Copy code on a paper insert.

As superhero films go, The Incredible Hulk is surprisingly compelling and better than you might remember, in part because it was lost in the shuffle of later MCU films and also because it’s often conflated with Ang Lee’s Hulk (2001) from the same studio. Universal’s 4K Ultra HD release boasts more image bang that you might be expecting and one of the very best object-based audio mixes we’ve heard yet on this format. Disney should really take note of it. As such, this disc is definitely recommended.

RT @BillHuntBits: Well, fuck. “All in all, about 600 employees across multiple divisions are expected to be let go, starting today. @WBHome…