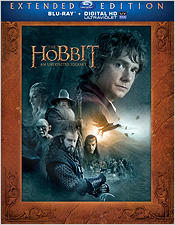 Having already reviewed the theatrical cut of Peter Jackson’s The Hobbit: An Unexpected Journey on Blu-ray here at The Bits, I’ll forgo discussing the film again for this review.  Here’s what you need to know about the 182-minute Extended Edition cut: The 12 minutes of newly-added material doesn’t really amount to much.  That’s going to be disappointing to some of you, but it’s probably to be expected given that – unlike The Lord of the Rings – The Hobbit is but one smaller book already greatly expanded into three films.

There are two new scenes, while six scenes have been extended.  Really only two moments in the new material make a difference to the story, both occurring in Rivendell.  In the first, Bilbo and Thorin overhear Gandalf and Elrond talking about the Dwarves’ quest, and Elrond reminds Gandalf that madness runs in Thorin’s family.  Bilbo sees Thorin’s reaction to this, and it’s clear that Thorin is fighting his own doubts about this very thing – a scene that mirrors Aragorn’s doubts that he’ll be able to fight the corruptive power of The Ring in Fellowship of the Ring.  The other meaningful addition occurs a few minutes later, when the White Council meets.  Gandalf explains to Galadriel, Elrond and Saruman in a bit more detail his reasons for supporting the Dwarves.  Beyond that, there are a couple of new songs and a few entertaining character moments, but nothing that really impacts the story.  This isn’t a better film that the theatrical cut, but it’s no worse either.

The film itself is contained on a single BD-50 disc in the set.  The quality is exactly on par with that on the theatrical BD release.  The movie disc includes two extras.  Once again you get the New Zealand: Home of Middle-Earth featurette that was on the theatrical Blu-ray.  You also get a feature-length audio commentary with writer/director Jackson and co-writer/producer Philippa Boyens.  Like their tracks on The Lord of the Rings films, it’s a great listen and is filled with much story and character insight.

As with the Rings Extended Editions, the lion’s share of the special features are found on a pair of Appendices discs, both Blu-rays that feature all their content in full 1080p (though there’s the occasional shot from the previous Rings production footage that was shot in SD and is upconverted here).

The first of these is The Appendices: Part 7 – A Long-Expected Journey: The Chronicles of The Hobbit – Part 1, which focuses on the production effort of assembling the crew, casting, pre-production, the actual filming and so forth.  It starts with a short Introduction by Peter Jackson, who explains what The Appendices are meant to be, that they’re continued from those on the Rings: Extended discs and that they’ll be continued on the next two Hobbit: Extended Editions.  The actual documentary materiel on this disc runs 4 hours and 31 minutes, and can be viewed selectively or with a Play All feature.  There’s a brief Opening (2:42), which serves as an additional introduction.  The Journey Back to Middle-Earth (48:19) tells the story of how the filmmakers ultimately were able to return to film The Hobbit.  You see some of co-writer and original director Guillermo del Toro’s involvement, there’s material on the effort to build the cast and crew and mount the production, and we see the “Dwarf Boot Camp” help the actors get into their characters.  Riddles in the Dark (17:00) depicts the start of filming in Gollum’s cave – the first scene in the new trilogy to be shot was Bilbo’s discovery of the ring.  In An Unexpected Party (25:28), the cast moves on to their next challenge – filming Gandalf and the dwarves recruiting Bilbo in Bag End.  It’s particularly interesting because we learn that the perspective tricks used for the Rings films (to play with the scale of different characters on screen) can’t be repeated here because of the use of 3D cameras.  The documentary then proceeds through the major sequences in the film in roughly chronological order to show what filming was like for each.  Roast Mutton (17:12) looks at the infamous Troll scene, Bastion of the Greenwood (10:41) looks at the introduction of Sylvester McCoy as Radagast, A Short Rest (29:12) features the filming of the White Council in New Zealand and then Christopher Lee’s portions in London, Over Hill... (13:40) covers the Dwarves’ climb into Misty Mountains (in the rain with Rock Giants) and ...Under Hill (19:15) takes the production into Goblin Town with actor Barry Humphries.  Out of the Frying Pan... (16:07) covers the final major scene involving the battle on the forest ledge, the fire and the eagles.  Return to Hobbiton (18:35) takes the cast and crew to Matamata, where the original filming set was recreated to become a permanent tourist attraction.  The Epic of Scene 88 (8:28) looks at an exhausting shoot on location, featuring the actors running across the rocky landscape day after day being chased by imaginary Wargs.  The Battle of Moria (10:57) is a look at the second unit shooting a scene from the prologue that was only a couple lines in the script but which expanded into an epic-scale production.  Finally, Edge of the Wilderland (22:37) covers pick-up shooting and the cast’s final days on the production, while Home Is Behind, The World Ahead (11:40) is a quick look at the film’s post-production and release, and also offers brief glimpses of the second film.  The disc ends with Credits (3:03).

Among the interesting things you’ll learn on Disc One: Martin Freeman almost couldn’t play the part of Bilbo because of schedule conflicts with Sherlock, but Jackson and company reorganized their own filming schedule to accommodate him when they couldn’t find a better actor to replace him.  Jackson had a health scare that delayed the start of filming a month.  The Hobbiton scenes were supposed to be shot a year earlier than they actually were, but the delay paid off because all of the plant-life around the set had grown in more fully.  And finally, Peter is the proud owner of the original Chitty Chitty Bang Bang car used in the 1968 film.  It was auctioned in 2011 by Profiles in History and it turns out Jackson was the buyer… which is somehow absolutely perfect and appropriate.  I’m a huge fan of that original film, so it makes me happy knowing the car will be loved and cared for by someone who really appreciates it.

The final disc in the set is The Appendices: Part 8 – Return to Middle-Earth.  It runs 4 hours and 45 minutes in all and again features a Play All option.  (Which takes the documentary content of this set to a whopping 9 hours and 16 minutes.)  The disc is broken into sections that look more specifically at all of the elaborate design and visual effects work that went into the film.  It starts with The Company of Thorin (62:41), which includes 6 featurettes detailing the family traits and characteristics of each major group of Dwarves (Assembling the Dwarves, Thorin, Fili & Kili, Balin & Dwalin, Oin & Gloin, Dori, Nori & Ori and Bifur, Bofur & Bombur).  Mr. Baggins: The 14th Member (16:00) covers Bilbo as you’d expect.  Durin’s Folk: Creating the Dwarves (75:25) looks at the monumental effort that was put into making each of the dwarves in the film both individual and identifiable, which required a much greater design effort that simply examining Tolkien’s text.  The Peoples and Denizens of Middle-Earth (58:09) offers 4 more featurettes covering different creatures and races from the film (The Stone Trolls, Radagast the Brown, The Goblins and Azog the Defiler).  Realms of the Third Age: From Bag End to Goblin Town (58:59) serves much the same purpose, offering 5 featurettes that detail the design effort for the film’s various locations (Hobbiton, Rhosgobel, Rivendell, The Misty Mountains and Goblin Town).  Finally, The Songs of the Hobbit (32:32) covers the film’s musical content, and there’s another set of Credits (3:23).

Unlike the Rings discs, there are no galleries of images here.  But the good news is, you really don’t need any.  You get to see tons of artwork in the featurettes of Part 8, and because they’re presented in high-definition, you can easily pause and look at the art in tremendous detail.

I have to say that after months of enduring one Blu-ray release after another filled with vacuous, EPK-style featurettes designed simply for use in putting butts in theater seats, it’s so refreshing to watch genuinely in-depth and interesting documentary content, produced by people who know and actually care about this material!  On a film like this, there’s so much effort put into imagining and developing every little thing that appears on screen, and you often never get to see most of it.  These Appendices – once again produced by Michael Pellerin, who served in the same role for the Rings films – draw you deeply into the world of the films.  Here you learn about the ideas and philosophies that ground every decision made by the filmmakers, you see the efforts, you hear the stories.  If you love these films and this world, it’s a very rewarding experience.  Outside of the occasional title like Prometheus, or some of the great work being done by Criterion and Shout! Factory, we just don’t get fine special feature content like this on Blu-ray anymore and that’s a huge shame.  The best thing you can say about the documentaries in this set – about any good special feature content really – is that after watching this material, I actually want to go back and view the film again.  There are things I learned about the story, the characters and the many connections to the Rings films here that deepen my appreciation for An Unexpected Journey.

I’ll close by noting that the discs come packaged in a red-brown plastic BD case, with a hard slipcover that fits nicely in style with the previous Rings: Extended Editions.  The set also includes access to an UltraViolet digital copy version of the film.  The menus feature custom Alan Lee and John Howe artwork.  Though the audio on the documentaries is in English, subtitles are available in many different languages.  And if there are Easter eggs, I’ve yet to find them.

Bottom line: Though the extended cut of An Unexpected Journey doesn’t have the same impact as the extended versions of the Rings films before it, the Appendices in this set are every bit as extensive, detailed and satisfying.  I can’t imagine anyone who loves the previous Rings: Extended Blu-rays not wanting to add this set to their collection too.  If you’re a fan of this cinematic world, it’s simply not to be missed.

RT @BillHuntBits: Heads-up: @SonyPicsHomeEnt is now shipping their fixed special features #Bluray for Lawrence of Arabia in #4K #UltraHD in…

Today on The Bits – The Digital Bits presents: The State of Physical Media in 2020 (So Far...) #Bluray #DVD #4K #UltraHD thedigitalbits.com/columns/my-two…