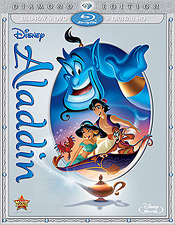 Aladdin was a break-out hit when it first appeared in theaters in 1992, greatly expanding upon the critical and commercial success of The Little Mermaid and Beauty and the Beast before it. (The Lion King would continue this upward trend just two years later, leading some historians to call this period a “renaissance” of Disney animation.) Clearly, much of this film’s success was due to Robin Williams’ extraordinary performance as the Genie – not just his voiceover work, but also the way his sheer physicality during the recording sessions informed the character animation. William’s frenetic energy and off-the-wall impersonations and references lent this film a level of humor and contemporary accessibility that audiences simply hadn’t seen from a Disney animated film since The Jungle Book.

Drawing upon elements from the 1924 Douglas Fairbanks film The Thief of Bagdad, Disney’s Aladdin tells the story of a young street thief named Aladdin, who is used by the villainous Jafar to retrieve a magic lamp from the mysterious Cave of Wonders. Jafar wants the Genie (Robin Williams) in the lamp to use his magic to help Jafar overthrow the kindly Sultan of Agrabah, by forcing a marriage with the Sultan’s daughter, Jasmine. But Aladdin uses the Genie’s magic instead to become a prince so he can court Jasmine himself, all while attempting to expose Jafar’s schemes. Meanwhile, Jasmine has no intentions of simply being a pawn in marriage… she has dreams of her own. And with the Genie in the mix, nearly anything can happen along the way.

In addition to Williams, Scott Weinger and Linda Larking shine here (as Aladdin and Jasmine), and the supporting voice cast includes the likes of Jonathan Freeman (as Jafar), Gilbert Gottfried, and Jim Cummings. A great musical score by composer Alan Menken, with songs by Howard Ashman and Tim Rice, elevates the film even further. Best of all, the film’s animation is bold and gorgeous, a mix of mostly traditional hand-drawn animation, lightly enhanced with occasional computer-animated elements.

Disney’s new Diamond Edition Blu-ray release offers the film in 1080p high definition, at the original 1.85:1 widescreen aspect ratio. In keeping with Disney’s previous animated Blu-ray releases, the transfer here isn’t meant to reproduce a theatrical film viewing experience. Rather, it strives to show you the full image quality of the original animation cells and background art. As a result, there’s little print grain in evidence. Instead, you’re looking the detail and texturing in the artwork itself. This can be a little off-putting if you’d prefer a more traditional theatrical presentation. Once you get used to it, though, the imagery really pops off the screen. Detail is exceptional, the colors are richly vibrant and accurate, and the contrast is rock solid, with deep, true blacks.

Audio is present in English 7.1 DTS-HD Master Audio, French 5.1 Dolby Digital, and Spanish 5.1 Dolby Digital, with optional subtitles in English, English for the Hearing Impaired, French, and Spanish. The DTS-HD mix is rich and enveloping, with a big wide front soundstage, and exceptionally lively surround channels. Panning is smooth, with superb clarity in dialogue. There’s good bass too. Check out the entire sequence as the Cave of Wonders collapses – surely, this film has never sounded better than it does here. And as you’d expect, the musical numbers really shine in this mix.

When you put this disc in your player, you have the option to view a selection of previews for Disney Movie Rewards, Disney Parks, The Muppets TV series, Star Wars: The Force Awakens, The Good Dinosaur, the Inside Out Blu-ray, and the Tomorrowland Blu-ray (there’s also a “Don’t Be Cruel” anti-smoking PSA). New extras produced especially for this Blu-ray release include The Genie Outtakes (8:53 – a really wonderful tribute to Williams, offering a look at unused performance moments introduced by Musker, Clements, and Genie animator Eric Goldberg, who are clearly emotional as they recall working with him), Aladdin: Creating Broadway Magic (18:53 – a look behind the scenes at the creation of the Broadway musical), Unboxing Aladdin (4:40 – a Disney Channel piece offering trivia on the film), Genie 101 (3:59 – dedicated to Williams, this piece explains the Genie’s many in-movie references for Millennial audiences who might not get them), and Ron & John: You Ain’t Never Had a Friend Like Me (5:36 – a great piece in which Muster and Clements recall their long friendship and work on this film). These are all in full HD – The Genie Outtakes and Ron & John are definitely the best of the lot. Of course, the Blu-ray package also includes a bonus DVD version of the film, and a Digital Copy.

Beyond this, the good news is that nearly all of the SD extras created for the previous Disney: Platinum Edition DVD are here as well, including all four deleted songs (Proud of Your Boy original demo recording, You Can Count on Me, Humiliate the Boy, and Why Me), both deleted scenes (Aladdin & Jasmine’s First Meeting and Aladdin the Lap of Luxury), all the music video segments (for Proud of Your Boy and A Whole New World), the Disney Song Selection option, both the original Filmmakers’ and Animators’ audio commentary tracks, the Inside the Genie’s Lamp guided tour, the Genie World Tour featurette, the complete A Diamond in the Rough: The Making of Aladdin documentary (with all sub-featurettes), the Alan Menken: Musical Renaissance Man featurette, The Art of Aladdin featurette (with commentary), and the publicity trailers (for Aladdin, Aladdin and the King of Thieves, and The Return of Jafar).

Missing from the DVD is the Pop-up Facts track, the Aladdin’s Magic Carpet Adventure and 3 Wishes DVD games, the self-guided version of the Inside the Genie’s Lamp tour (as noted above, the guided version IS included), and all of the Animation Art and Publicity image galleries – these last of course being the biggest loss. So if you want to keep any of this material, we recommend you hang on to your copy of the Platinum Edition DVD.

Aladdin is certainly a beloved favorite among Disney animated films from the “renaissance” era, and it’s a title we’ve waited a long time for on Blu-ray here in the States (the film was released in a standard Blu-ray edition in parts of Europe in March of 2013, but this new Diamond Edition is new to all regions). Given the high A/V quality of this release, its fine batch of extra both old and new, and the fact that you can order the disc on Amazon for just $20, it’s an exceptional deal. Don’t hesitate to add the Aladdin: Diamond Edition to your Blu-ray collection.

Bits #BD Review – @timsalmons dives into the #Bluray #3D debut of the 1954 film THE DIAMOND WIZARD, available to be seen in #3D for the first time with a new restoration from 3-D Film Archive, courtesy of @KLStudioClassic. @BillHuntBits @BobFurmanek thedigitalbits.com/item/diamond-w…