The Digital Bits presents: The State of Physical Media in 2020 (Mid-Year Edition) 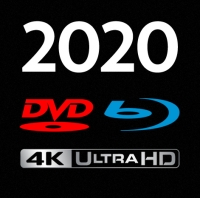 All right, we have a new update on the health of the home entertainment market from the Digital Entertainment Group (DEG) for the first half of 2020. And the numbers are not entirely unexpected...

According to the DEG, total home entertainment spending (all categories) was up about 26% for the first half of 2020 (through the end of June) compared to the same period last year.

Total digital spending was up 36% during that period (the specific breakdown was +33% for electronic sales, +33% for VOD, and +37% for subscription streaming). That’s the good news.

This is pretty close to what we predicted here at The Bits at that time, when (based upon Media Play News weekly market data) we calculated roughly a 10.12% decline in packaged goods (discs) for Q2. The DEG numbers represent a more complete poll of actual transaction data from DEG member companies, so with those factored in the drop increased just a bit.

Here’s a rundown of other notables from the DEG’s Mid-Year 2020 Home Entertainment Report (found here)...

Now then, let’s look ahead to Q3 via the weekly data from Media Play News (you’ll find our look at Q1 and Q2 here)...

Again, compare this to Q1 2020 (down 22.4%) and Q2 2020 (down 11.11%). So it seems likely that the current downward trend for discs will continue though the end of Q3. We don’t yet know what kind of holiday shopping season there’s going to be this year, which is a wildcard. But we do know that we’re in the middle of an ongoing pandemic and economic downturn. So it seems likely that holiday shopping will be generally depressed as well.

It’s far too early to make a prediction for 2020 as a whole, beyond saying that physical media seems likely to be down by double-digits again this year, even as the transition to digital accelerates, and cord-cutting continues. Do keep in mind that physical media has declined by roughly double-digit percentages every year since 2012, so again this is not really a surprise.

And that’s where we are for now. For more information, please visit the Digital Entertainment Group and Media Play News. Our thanks to everyone at each for their hard work.