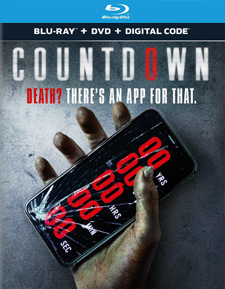 Countdown is a modern horror film about evil consequences arising from innocent actions. Rather than being set in the distant past or in creepy surroundings, this low-budget film takes place in the present day under ordinary circumstances. The horror springs from the contemporary fascination with and addiction to cellphones.

Countdown is an easily downloaded app that tells the user how much time he/she has left to live. Most people learn that death is decades away, and they shrug off the app as just one of many harmless divertissements for the era of the smart phone. Some users, however, get a disturbingly short time to live. Not really believing the app, they nonetheless freak out and take precautions to evade their predicted destiny.

One young woman who gets a brief countdown is hospital nurse Quinn Harris (Elizabeth Lail), who downloaded the app with a bunch of friends. At work, Quinn tries to comfort a troubled patient scheduled for surgery who was convinced by the app that he’s going to die under the knife. He does, but under strange circumstances—not in surgery—at the precise time the app predicted. Quinn starts to worry. The app indicates she will die in a few hours.

Her efforts to delete the app are fruitless—it seems to have a mind of its own—so she buys a new phone to rid herself of the terrifying app. But the app appears, once again noting the exact time she will die. In the phone store, she meets Matt (Jordan Calloway), who has also downloaded the app and learned that he has only a few hours to live. Together they try to extricate themselves from their nightmare. Their quest leads them to a sarcastic tech guy (Tom Segura) and a young priest (P.J. Byrne).

Though the concept isn’t bad, writer/director Justin Dec uses it as a springboard to imitate the Final Destination franchise, about the inability to avoid destiny, and even The Exorcist. He also throws in sub-plots about a dead mother, a sexually abusive doctor, a rebellious younger sister, and a CliffsNotes lesson on curses through the ages. To amp up the terror, he introduces briefly seen humanoid monsters, but by then, the film has already fallen into the abyss of dopey horror flicks.

But it’s Byrne’s over-the-top performance as the priest that truly sinks the film. Treating a life-or-death situation with adolescent glee because he has studied curses endlessly and finally has a chance to confront one firsthand, the priest is inappropriate comic relief at a tense moment in the story.

Rated PG-13, the Blu-ray release from Universal Pictures Home Entertainment, featuring 1080p High Definition resolution, is presented in the anamorphic widescreen aspect ratio of 2.39:1. Cinematographer Maxime Alexandre varies his lighting to suit the action. He stays mostly with bright light in the early scenes with friends and most of the scenes in the hospital. Just prior to scary moments, lights flicker, go out completely, and throw the scenes into deep shadow. In two major scenes, only a cellphone provides illumination. In a bedroom scene, a table lamp flickers before it goes out. When the priest tries to protect Quinn and Matt from doom, the scene is set in a dark basement so that only the three characters are visible. A key scene takes place in a dark stairwell of the hospital as a young man, alone and disabled, confronts his predicted destiny. Close-ups of cellphones with the dreaded countdown are shown frequently to increase suspense. Characters with short countdowns are plagued with horrific visions, which are manifested as quick shock moments.

The soundtrack is English 5.1 DTS-High Definition Master Audio. Optional subtitles include English (for the hearing impaired) and Spanish. The film uses sound for several shock moments. Dialogue is clear and distinct throughout. In the second half of the film, Quinn and her young sister Jordan hear low, haunting voices. Director Justin Dec uses sound to build suspense as lead-in to big scare moments but he’s not especially imaginative, relying on tropes from many previous horror films.

There are no special materials or behind-the-scenes featurettes on this release. There are 20 chapters for easy access to specific scenes. A Digital code is included on a paper insert inside the 2-Disc Blu-ray/DVD Combo Pack.